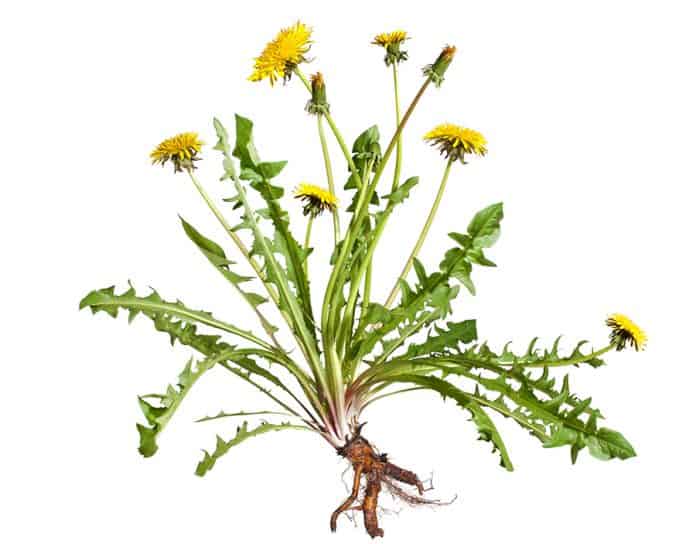 The common weed we call dandelion is one of nature’s incredible healing herbs. The botanical name for dandelion is Taraxum officinale. Taraxum is derived from the Greek words “taraxos” for “disorder” and “akos” meaning remedy.

Dandelion is a common weed with a characteristic beautiful yellow flower that assumes a globe of seeds to spread its humble yet incredible medicinal virtues. Its hollowed stem is full of milky juice, with a long, hardy root and leaves that taste good in a spring salad.

The latex or milky sap that comes from the stem has a mixture of polysaccharides, proteins, lipids, rubber and metabolites such as polyphenoloxidase. Dandelion also contains glycoside compounds such as taraxacin, triterpenes like taraxol and taraxsterol, choline, tannins, sterols, asparagine and carotenoids.

Dandelion is one of the most well known traditional herbs for all sorts of ailments that involve toxicity within the blood, liver, kidneys, lymphatic system and urinary tract.

Dandelion has been listed in a variety of formulas and codeces around the world since the tenth century. Its use was expounded by many cultures from the Greeks to the Northern American Indians, who used it for stomach ailments and infection.

Dandelion latex has been used to heal skin wounds and protect wounds from infection—a function the plant itself uses when it is injured.

Dandelion is known to protect and help rebuild the liver. Culpeper documented that it “has an opening and cleansing quality so is therefore very effectual for removing obstructions of the liver, gall bladder and spleen, along with diseases arising from them such as jaundice.”

It is known to stimulate the elimination of toxins and clear obstructions from the blood and liver.

This is thought to be the reason why dandelion helps clear stones and gravel from the kidneys, gallbladder and bladder. It has also been used to treat stomach problems, and has been used to treat blood pressure. In ancient Chinese medicine, it has been recommended for issues related to “liver attacking spleen-pancreas”—describing the imbalance between liver enzymes and pancreatic enzymes.

In Chinese medicine, dandelion is known to clear heat, more specifically in the liver, kidney and skin. These effects are consistent with dandelion’s traditional uses for rheumatism, gout, eczema, cardiac oedema, dropsy and hypertension. Dandelion is also said to increase the flow of bile. Dandelion root has also been used to heal bone infections.

Dandelion has also been used to increase urine excretion, and reduce pain and inflammation. Yet it also contains an abundance of potassium—which balances its diuretic effect (as potassium is lost during heavy urination).

A 2014 study from China’s Xinjiang Medical University found that Taraxacum mongolicum inhibited hepatitis B (HBV) among human liver cells. The research found inhibition rates of over 91 percent. Just as found in the study above, the dandelion blocked gene expression of the virus while not harming the liver cells (Jia et al. 2014).

In a study of 96 chronic hepatitis B cases at the Beijing TCM Hospital (Chen 1990), 46 controls were compared to 51 patients given a mix of herbs that included a dandelion species. After five months of use, the medicinal herb group had a total effective rate of 74.5% compared to 24.4% in the control group.

“even the most serious cases of hepatitis have rapidly been cured, sometimes within a week with dandelion root tea taken in cupful doses four to six times daily…”

Research from the Chinese Academy of Sciences has found that dandelion significantly inhibited two influenza strains: H1N1 and A/PR/8/34. Again, the anti-virus affect was found without harm to human cells (He et al. 2011).

Among 222 different medicinal extracts, dandelion was one of ten that regulated and inhibited the differentiation of osteocytes to osteoclasts—associated with the reabsorption process that results in bone loss and bone remodeling (bone spurs and growths) (Youn et al. 2008).

A study by researchers at the University of British Columbia in Canada (Hu and Kitts 2004) found that dandelion extract suppressed prostaglandin E2 (PGE2) and COX-2. These were apparently inhibited by the luteolin and luteolin-glucosides in dandelion. PGE2 is involved in the pathway that involves pain and COX-2 is an enzyme also involved in pain. Inhibiting COX enzymes is what most pain-killing drugs do, but with the typical side effect of gastric and intestinal problems.

A 2012 review of research from Spain has found clear evidence that dandelion reduces inflammation. They also found it to be a strong antioxidant (González-Castejón et al. 2012)

In a 2007 study from researchers at the College of Pharmacy at the Sookmyung Women’s University in Korea (Jeon et al. 2008), dandelion was found to reduce inflammation, leukocytes, vascular permeability, abdominal cramping, pain and COX levels among exudates and in vivo.

Leukotriene production was decreased with an extract of dandelion (Kashiwada et al. 2001).

This in turn prevented lipid oxidation—one of the mechanisms in heightened LDL (bad cholesterol) levels and artery inflammation.

A 2016 study from Canada’s Lakehead University found that dandelion extract inhibits cell damage from ultraviolet B radiation. It inhibited free radical formation and protected the cells against UVB absorption (Yang and Li 2015).

A 2015 study from France’s University of Toulouse found that dandelion inhibited the growth of cancer cells.

Dandelion is one of the richest natural sources of inulin which is a potent prebiotic. Laboratory research has found that it stimulated the growth of fourteen different strains of bifidobacteria. Bifidobacteria are important components of the immune system that inhibit pathogenic bacteria (Trojanova et al. 2004).

Multiple studies have shown dandelion to be a potent detoxifying agent. A 2015 study from Spain’s University of San Pablo has found that five different Taraxacum species effectively reduced free radical levels within the tissues (Mingarro et al.). A 2001 study found that dandelion increased the liver’s production of superoxide dismutase and catalase, increasing the liver’s ability to purify the blood of toxins (Cho et al.).

In a study of 24 patients with chronic colitis, pains in the large intestine vanished in 96% of the patients by the 15th day after being given a blend of herbs including dandelion (Chakŭrski et al. 1981).

The flowers, roots and the leaves are edible. Dandelion leaves can be picked most of the time, but are tastier during the spring. The roots are typically collected by digging up during the summertime. They can be split and then sun-dried.

Infusion tea can be made from all the plant’s parts. Roots will typically require a little boiling time, but the leaves and flowers can be steeped in hot water for 15-20 minutes before drinking.

Natural areas are best to harvest from. Lawns or roadsides that have been sprayed or pounded by traffic can contain residues of these toxins. Dandelion supplements are also available, and so are dandelion teas.