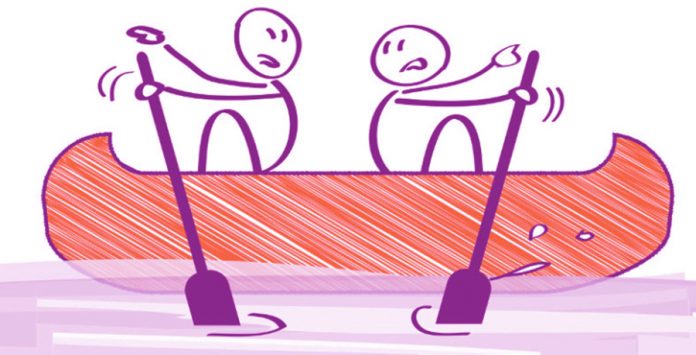 I’ve never heard of a relationship that was completely free of problems. People are much too complicated to have things run smoothly when we are intimately connected with another human being. Haven’t you noticed? We have too many blind spots and too much emotional baggage to move in total accordance with another person, who has their own set of blind spots and their own emotional baggage. We are simply too strange to have our relationships ever be perfect.

What I am saying is that love is a messy business, and it’s our responsibility to sort out this mess if we care about maintaining healthy relationships.

After having a fight with my partner recently, I have been thinking a lot about different ways of avoiding unnecessary conflict in relationships—how to constantly orient the dynamics of a relationship toward the good of both people involved.

It’s not easy. There are so many moving parts of an intimate relationship that it becomes incredibly difficult to find our way back to a place of peace when serious conflict bubbles to the surface.

It’s like we have too much stake in how the other person is acting, that we can’t take ourselves out of it and just look at the problems of the relationship objectively.

We feel as though anything our partner does that fails to live up to our expectations is a direct assault on our most intimate sense of self—and any kind of problem-solving or team efforts are thrown out the window.

Around the same time I was having this fight with my partner, I stumbled across some amazing relationship advice as I finished Dr. Jordan Peterson’s highly esteemed (and highly controversial) book, 12 Rules For Life: An Antidote To Chaos.

Now, whatever people may think about Jordan Peterson, he is a brilliant psychologist who offers up a wealth of knowledge in his books and lectures that can be of practical use to anyone. I stand behind him wholeheartedly, and I recommend the book to anyone who is interested in cleaning up their lives a bit.

Here’s some relationship advice from the good doctor:

“On many occasions in my nearly 30 years of marriage, my wife and I have had a disagreement—sometimes a deep disagreement. Our unity appeared to be broken, at some unknowingly profound level, and we were not able to easily resolve the rupture through talking. We became trapped, instead, in emotional, angry, and anxious argument. We agreed that when such circumstances arose we would separate, briefly: she to one room, me to another. This was often quite difficult, because it is hard to disengage in the heat of an argument, when anger generates the desire to defeat and win. But it seemed better than risking the consequences of a dispute that threatened to spiral out of control.”

Alone, trying to calm down, we would each ask ourselves the same single question: ‘What had we each done to contribute to the situation we were arguing about?’ However small, however distant … we had each made some error. Then we would reunite, and share the results of our questioning: here’s how I was wrong …”

I just love that. Not only is this incredibly practical advice, but it is also truly humbling.

This way, we can help recognise whatever deeper conflict this particular problem is showing us, while attempting to fix it in a way that is not self-righteous or judgemental. Brilliant.

So many interpersonal problems I run into have something to do with blaming the other person without seeing my role in the situation. We like to ride on our high horse when conflict emerges, because then we don’t have to acknowledge the personal faults we are bringing to the table. It is astoundingly arrogant, but in my experience, we all have the propensity to act like this. It’s self-protection at its worst, and the remedy to this behaviour is to be mindful of our own blind spots.

This exercise doesn’t just apply to romantic relationships, but to all the relationships in our lives that can get tricky, whether it be with friends, relatives, or business partners. The ability to recognize how we are wrong is vital to upholding human connection.

Ultimately, it was admitting our respective faults that allowed me and my partner to keep our relationship alive and well—and for that I am truly grateful. In seeing the ways in which we contributed to the argument, the underlying feelings that made coming to terms so goddamn difficult, we were able to have an ‘actual’ conversation about what was happening between us.

I say ‘actual’ conversation because the way we often engage with each other, particularly in conflict, does not resemble an actual conversation. It is really just talking at the other person—and when they talk, we just think about what we want to say next, instead of listening. That’s not a real conversation.

1. Thinking—which means figuring things out in the moment, without a preconceived idea.
2. Listening—which entails truly hearing what the other person is saying, without looking at them through a lens of judgement.

If we can learn to engage in productive and meaningful conversations, we can start to improve the quality of our relationships—and maybe even improve the state of the world at large. Once we get beyond our ego and step into the realm of pure attentive awareness, anything is possible.