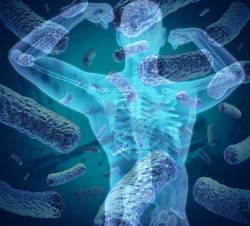 Fears surrounding exposure to microbes are omnipresent, which is why it may come as a surprise to find research showing infection with certain “germs” confers significant health benefits.

We live in a day and age where germ theory has undergone a sort of apotheosis, assuming an almost Godlike power to affect and permeate every area of our lives with the fear of infection.

Not only are external institutions increasingly attaining the authority to force us to inject ourselves and children with preparations purported to defend us against germs, but even our inner thoughts are often infected uncontrollably with fears about exposure to them. Even the CDC has declared itself impotent against so-called “nightmare” bacteria, adding to the sense of powerlessness so many feel about their health destinies.

What makes this situation all the more surreal is the relatively recent discovery of the microbiome, namely, the 100 trillion viruses, bacteria, fungi, parasites, which outnumber our own cells 10-1, and which proves that we are more “germ” than “human,” and in many respects, would not be alive without them: e.g. about 8% of our genome is retroviral in origin, 90% of our immune system depends on bacteria in our gut. How, then, can these microorganisms be as deadly as we are told, while at the same time be responsible for making possible our life itself?

The cognitive dissonance generated by these diverging, if not diametrically opposed paradigms — “microbes as deadly” versus “microbes as essential to life” — is enough to drive the non-fluoridated mind a bit crazy. But so much is riding on belief in one narrative over another. If germs are not as deadly as we are told, how would we justify the 60+ vaccines in the childhood vaccination schedule, and the 250+ in the developmental pipeline? Clearly, there are bio-political and economic motivations pushing the germ-centric ideology forward, even in the face of an accumulating body of contrary evidence.

One such recent academic challenge to the germ theory can be found in a study published this year in Atherosclerosis entitled, “Association of measles and mumps with cardiovascular disease: The Japan Collaborative Cohort (JACC) study,” which found that exposure to common infections during childhood could decrease the risk of atherosclerotic cardiovascular disease (CVD).

The study was based on;

The study found that a history of measles and mumps infection, especially in the case of those with both infections, were associated with lower risks of mortality from atherosclerotic CVD.

The detailed results were reported as follows:

This is not the only evidence available to show the value of infection with measles. For instance, we have indexed over twenty studies showing the potential immunological value of measles infection for over a dozen different conditions. You can view them on our page, “Health Benefits of Measles Infection.” I reported in more detail on this research in an article titled, “The Underreported Health Benefits of Measles Infection.”

Should we be so surprised that our immune system, which co-evolved with microbes for millions of years, is now dependent in some degree on interaction with them? In a previous article entitled, “Why Vaccines Are Not Paleo,” we explored this concept in greater depth:

“Our collective consciousness around infectious disease has been programmed with the alluringly reductionist perspective that vaccination has helped to save us from major deadly diseases, irrespective of the radical changes in sanitation and hygiene that marked the early to mid-twentieth century. This line of rhetoric, of course, also ignores the fact that the ~3.4 billion year long struggle of the living cell to perfect itself into our present day organism required the development of a sophisticated immune system – one that successfully interfaced with a virtually infinite number of infectious challenges along the way, and kept us alive and well before the nanosecond old (in biological time) shift into modern medical interventions began only 100 years ago.”

Germ theory has, in certain respects, taken on the characteristics of an infection itself. Not a physical one, but an ideological one, i.e. a meme. Ironically, these memes not only have a life of their own, and replicate like the very infectious entities they conceptualise, but they have physiological effects that can adversely affect immunity. A nebulous fear of “germs” (lethal, invisible, omnipresent), for instance, can contribute to a flight-or-fight/sympathetic dominant state and therefore can result in immune dysregulation, up-regulating cortisol and down-regulating the very cell-mediated immunity needed to prevent opportunistic infections.

Even more ironic is the fact that the very attenuated germs the vaccine industry created to inject into our bodies and “educate” our immunity are often deadlier than the wild-type viruses or bacteria they are meant to replace as safer versions.

As our scientific understanding of the microbe-dependent nature of our health continues to expand, and germ theory and its derivative agenda of vaccinology continues to confront evidence that contradicts its basic tenets, we finally can see a way past the increasingly dismal view projected by health authorities like the CDC and the WHO that germs will be the end of us all; that is, unless we employ “live saving” vaccines and drugs, or support global germ eradication campaigns that are not only not working, and by principle never will, but may actually be harming more than they are helping.

Ultimately, when we come to embrace the “germ” not so much as other but self, the endless war against microbes will give way to a type of peace and compassion between self, body, and the natural world that will be essential for true healing to take place.