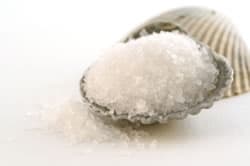 Let’s get right to the point – most people love salt, however perfecting how to eat salt is an art most have not yet discovered. Not all salts are equal. Alton Brown of Food Network fame explains that all salt is sea salt from one time or another, even if it’s found in the Himalayas.

Many natural salts have gained gourmet status; and, are recommended for their rich mineral content providing numerous health benefits. Choosing a salt depends on individual taste preferences and upon the application for which it will be used.

Table salt is the most common salt found in kitchens. It’s a finely ground, refined form of rock salt, and is slightly bitter-tasting from additives used to keep it from clumping. Most minerals are removed during processing. Some forms of table salt are artificially treated with iodine.

Kosher salt has a milder, less pungent taste than table salt and is the choice of many chefs as the flavour disperses quickly as it dissolves fast. The coarse crystals are also excellent for curing meats.

Himalayan Pink Salt:
A star among salts, Himalayan salt is typical of coarse salts, with large-grained crystals best used in a salt grinder. Coarse salts are not as moisture-sensitive as other types of salt which allows them to be stored for long periods. Himalayan pink salt is unrefined and high in minerals, making it a healthful choice. It is useful for both seasoning or as a finishing salt.

Brown explains that seasoning salt draws out and enhances the flavour of food during cooking. Finishing salt is sprinkled just before eating, “…adding a burst of salty goodness and crunchy texture at the very end”.

Kala Namak: This is an unrefined, authentic Indian salt with a strong sulfuric flavour. This salt is preferred by vegan chefs for adding an egg-like flavour to dishes.

Hawaiian Alaea sea salt: This is a traditional red-coloured salt which is generally used for preserving and seasoning foods. Enriched with Alae, a volcanic baked red clay, it includes iron oxide for colour and flavor, it is earthy and mello tasting, and is used in many authentic Hawaiian dishes.

French sea salt: This salt is hand-harvested from the Atlantic coast of France, it is unrefined, and is high in minerals, especially natural iodine. It is a perfect replacement for the chemical taste of iodised salt. French sea salt has a moist texture and is lower in sodium chloride that other salts.

Italian sea salt: From the coast of Sicily, this unrefined salt is rich in magnesium, iodine, fluorine, potassium and sodium chloride. It is delicate and flavourful.

Hawaiian Hiwa Kai or Black sea salt: This salt is black in colour due to the addition of activated charcoal, which enhances the flavour. The charcoal is known for its ability to aid a detox as well as neutralise stomach acids, helping to prevent acid reflux.

Celtic sea salt or Grey salt: Grey salt, collected by hand on the Brittany coast in France, is considered one of the best salts by many in the culinary world because it is unrefined and loaded with minerals. It comes in coarse, fine or extra fine grind and provides a rich, luscious flavour.

Fleur de sel: Considered the caviar of salts, this specialty salt is hand-harvested from the Guerande region salt ponds in France. The salt blooms like a flower on the water’s surface under “just right” weather conditions and is harvested only once a year. It is said to melt slowly on the tongue with a lingering, earthy flavoir.

Most restaurant and professional chefs are taught to salt a dish by using the three-fingered pinch method. Although this seems like a lot of salt the first time you take a pinch, in reality it’s the equivalent of 1/8 to 1/4 tsp. So salt with style using this method and stay in control to prevent over-salting a dish.