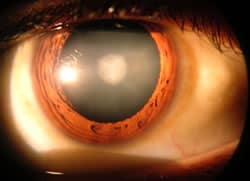 The human eye is uniquely equipped to stay young in appearance and health late into life (thanks to the heightened expression of the enzyme telomerase) but not without good nutrition!

The gradual clouding of the lens inside of the eye which leads to a decrease in vision – even blindness – is called a cataract. It is believed to be an inevitable part of aging, but it has clearly modifiable risk factors and natural interventions that can be used to slow and even reverse its progression, such as:

It has been known from animal research for over two decades that statin drugs have the potential to cause the progressive clouding over of the lens of the eye known as cataract, and which is the most common cause of blindness. Post-marketing surveillance of statin drug users also shows that when taken, either alone or in combination with other drugs which inhibit their metabolism, these drugs increase the risk of cataract in those who take them. One of the identified mechanisms for the cataractogenic potential of these drugs is that they are able to gain systemic distribution throughout the body, passing through the blood-brain-barrier and entering the eye itself – particularly the outer cortical region of the lens where cholesterol synthesis is critical – thereby producing lens damage.

A solid body of evidence focusing on the beneficial effects of curcumin in the animal model of cataract formation reveals that this highly therapeutic polyphenol — which gives turmeric its golden hue – is able to protect against the formation of cataracts.

Found in Kale, egg yolks and marigold, Lutein has been found to improve visual function in patients with age-related cataracts, in a 2-year double-blind, placebo-controlled pilot study.

According to a study published in the journal Biogerontology in 2005 titled, “Aging reversibility: from thymus graft to vegetable extract treatment — application to cure an age-associated pathology,” wheat grass may actually REVERSE LENS OPACITY ASSOCIATED WITH CATARACTS.

“Old dogs were orally treated for a month and the lens opacity analysed before and after the treatment. Results showed a reduction from 25 to 40% of lens opacity. The efficacy of wheat sprouts in the recovery of age-related alterations and in treating age-associated pathologies could be due to the contemporary presence of small regulatory acid peptides, a remarkable level of highly energetic phosphoric radicals and antioxidant molecules, peculiarities that may be, to some extent, related to the aging process regulation.”

This list is only the tip of the iceberg and shouldn’t be interpreted as an attempt to rattle off ‘magic bullets.’ Truth be told, there are hundreds of foods, spices, herbs, etc., which are likely to benefit the eye if we incorporate them in culinary doses into our diet. The point is to focus on organically-produced, nourishing, colourful, lovingly produced foods that are fresh made. This is what will keep the eyes young, vibrant and full of life!