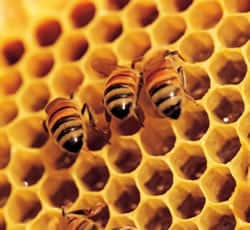 Amazingly, something as simple as crude honey has been found to alleviate an embarrassing scalp condition that most body care products and drugs can’t even make a dent in.

Honey’s strange power to resolve chronic dandruff and seborrheic dermatitis, while common knowledge within traditional ‘folk medicine’ systems of healing and countless personal anecdotes, has only recently been ‘clinically confirmed’ to the point where a peer-reviewed study was published on the phenomenon in the European Journal of Medical Journal, over a decade ago.

In the study, twenty male patients and 10 females, between the ages of 15 and 60 years, presented with scaling, itching and hair loss with lesions described as “scaling macules, papules and dry white plaques with crust and fissures.” The patients were instructed to apply diluted crude honey (90% honey diluted in warm water) every other day on the lesions with gentle rubbing for 2-3 minutes. After 3 hours, the honey was gently rinsed with warm water. The patients were monitored for changes in itching, scaling, hair loss and lesions during the treatment period, which lasted 4 weeks. The results of the study were remarkable:

“Itching was relieved and scaling was disappeared within one week. Skin lesions were healed and disappeared completely within 2 weeks. In addition, patients showed subjective improvement in hair loss.”

Additionally, those patients who saw improvement in the initial phase of treatment were enrolled in a ‘prophylactic phase,’ intended to prevent relapse, lasting six months. The results were reported as followed:

“Half the patients were treated with the topical honey once weekly and the other half served as control. All the patients responded markedly with the application of honey. Itching was relieved and scaling disappeared within one week. Skin lesions were healed and disappeared completely within 2 weeks. In addition, patients showed subjective improvement in hair loss. None of the patients (15 patients) treated with honey application once weekly for six months showed relapse, while the 12/15 patients who had no prophylactic treatment with honey experienced a relapse of the lesions 2-4 months after stopping the treatment.”

The conclusion of the study was that, “crude honey could markedly improve seborrheic dermatitis and associated hair loss and prevent relapse when applied weekly.”

So, how does honey work its magic? One explanation is that chronic seborrheic dermatitis and dandruff are caused by the overgrowth of natural skin pathogens, including fungi known as dermatophytes, and honey is an excellent broad spectrum antibacterial and antifungal. It also has significant wound-healing and anti-inflammatory properties, making it ideal for the treatment of inflammatory and pathogen-associated skin conditions.

We should not be surprised by these remarkable results. Honey has been considered one of nature’s most remarkable gifts to mankind since ancient Indian (vedic) civilization. In ancient Egyptian culture honey was the most popular drug mentioned: 500 times in 900 remedies. We can assume humankind’s appreciation for honey as both a medicine and food stretches back much further, as intimated by 8,000 year old Stone Age paintings.