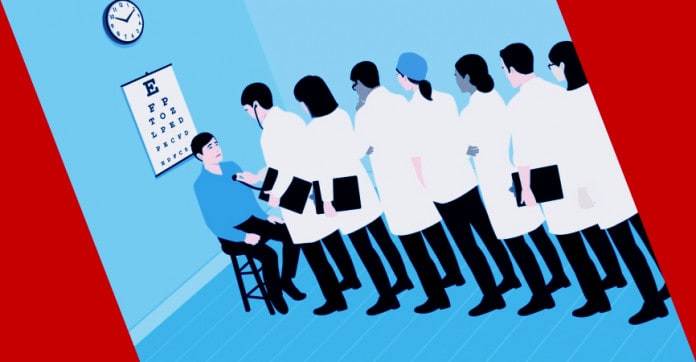 Over the past few decades, the incidence of cutaneous melanoma (cancer that starts in the pigment-producing cells of the skin, the most common kind of melanoma) has increased tremendously. We are now six times as likely to be diagnosed with melanoma as we were 40 years ago. What’s driving this rapid increase in melanoma diagnoses? Are we more susceptible to skin cancer now than in the mid 1990s? Or could it be that we are finding more melanomas because we are simply looking harder for them?

In a recent article in the New England Journal of Medicine, H. Gilbert Welch, researcher at Brigham and Women’s Hospital; Benjamin L. Mazer, pathologist at Yale University School of Medicine; and Adewole S. Adamson, dermatologist at the Dell Medical School at the University of Texas, discuss the reasons behind the rise in melanoma diagnoses, and why diagnosing more skin cancers isn’t making us healthier.

If you follow the Lown Institute regularly, you know that not all cancer screening saves lives. Screening means testing people for a health condition who aren’t showing any symptoms, with the idea that catching the problem early can prevent poor health down the line.

Unfortunately, with cancer screening the idea doesn’t always work in practise. Rather than catching cancers that will one day cause harm, screening for cancers such as thyroid cancer, breast cancer, and prostate cancer, has led to more cancers being diagnosed, but it has not reduced mortality. That means that we are finding and treating more cancers that would not have caused harm, what we call “overdiagnosis.” The likelihood of overdiagnosis from cancer screening increases as we screen more people who are too young or too old to benefit from screening.

Welch and colleagues share several reasons why the explosion in melanoma is likely from overdiagnosis. The first is that sun exposure alone cannot explain such a large rise in melanoma diagnoses. Research shows that sun exposure and tanning increases one’s risk of skin cancer by 20-100%. However, that’s not the same as a 500% increase in diagnoses, which is what happened between 1975 and today. Even if no one before 1975 ever got sunburned and in 2017 everyone in the U.S. had a history of severe sunburn for example, the incidence of melanoma would have doubled, but not increased six-fold, the authors write. Some other factors must be at work.

The authors point to several trends in dermatology which have led to more diagnoses: more screening skin examinations, more biopsies, and expanding the definition of what skin changes are considered “cancer.” It makes sense that more screening would lead to more discoveries of cancer; in fact, that is the objective of screening. But how could the definition of skin cancer change?

Believe it or not, the definition of what is melanoma and what is a benign lesion is not a hard and fast rule. Unless the cancer starts to spread (in which case one knows it is dangerous), there are “no definitive diagnostic criteria” for when a skin legion should be classified as a melanoma, the authors write. Often the presentation of a skin legion is ambiguous and pathologists can disagree.

Over time, the propensity of pathologists to diagnose melanomas has also increased.

In one study, nine pathologists reviewed skin biopsy specimens in 2008-9 that had been looked at for diagnosis originally in 1988-1990.

On average, 64% more specimens were diagnosed as melanomas in 2008-9 compared to 1988-1990. In seven cases, the same doctor interpreting the same slide twenty years later changed their diagnosis from benign to melanoma.

What explains this pattern? Doctors are punished for missing a cancer diagnoses, but not for overdiagnosing, so it makes more sense for them to “play it safe.” Dermatologists are also more likely to refer patients for a biopsy than they have in the past, which in part may be driven by self-referrals (dermatologists referring patients to get biopsies at their own labs) and pressure from private equity ownership to increase revenue through more biopsies.

If our more aggressive screening were making us healthier, it would not be a problem. But that doesn’t appear to be the case, Welch et al write. While diagnosis of early-stage melanoma has grown 50 times the rate as in 1975, the rate of invasive melanoma has not gone down.

“Catching the cancer early” is the goal of screening, but diagnosing many more melanomas early has not abated the rise of invasive cancers.

Additionally, the rate of mortality from skin cancer has remained stable. Over the past few years there has been a fortunate reduction in mortality, but this is much more likely due to treatment breakthroughs in metastatic melanoma, rather than early detection. “Despite all the additional detection over the past 40 years, melanoma mortality did not change until the advent of improved treatment for metastatic disease,” the authors write.

Overdiagnosis of melanoma creates more harms of its own. A cancer diagnosis often leads to anxiety and increased out-of-pocket costs for treatment and surveillance. There are potential complications from biopsies, such as infection. And the time that dermatologists spend screening healthy patients may make it harder for people with symptomatic skin disease to get time with doctors.

What Can We Do?

The increase in melanoma diagnoses has created a vicious cycle: As disease becomes more common, there are more campaigns to raise awareness, leading to more screenings, more referrals, and even more diagnoses. How do we break this cycle? Here are some ways we can reduce melanoma overdiagnosis:

“Now is not the time to add more anxiety and expense to an already anxious and expensive world.”
H. Gilbert Welch, Benjamin Mazer, and Adewole Adamson, New England Journal of Medicine

Finally, we have to stop paying physicians based on volume of services, because this encourages unnecessary screening and follow-up procedures. As much as skin cancer screening has permeated the public health narrative, we have to acknowledge the harm and cost caused by this practice, and stop for the benefit of patients.

*For more information, please visit the below website.
www.lowninstitute.org