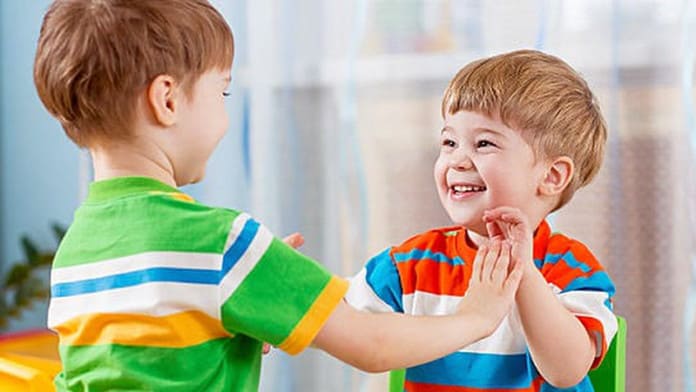 As human beings, we tend to favour people we think are like us or have something in common with us – we’re often wary of people who are different. Evolution made us this way so that we could find allies against outside threats. The problem comes when this old instinct to prefer our ‘in-group’ leads us to discriminate, dehumanise, or act violently toward others we perceive as ‘the other’ or members of the ‘out-group.’

So what allows us to get past that tendency to be so easily biased for and against people? A new study suggests one step: focus on co-operation.

Measuring The Impact Of Anticipation

In this study, researchers Antonia Misch of Ludwig Maximilian University and Yarrow Dunham of Yale University formed artificial in-groups and out-groups in American and German children by randomly assigning them to wear an orange or green-coloured scarf. Then, they asked the children to look at sets of photos featuring two children (each with a different scarf colour) and to rate their likeability and niceness. The difference in likability scores between members of the child’s in-group and out-group provided a measure of favouritism.

Before any actual play took place, however, the researchers measured in-group favouritism again, using the same method. When they compared the results, they found that children who’d been told they’d be playing with the out-group showed reduced favouritism toward their own group and less bias against the other group than children in the control group.

“Just looking at the anticipation of co-operation triggers more positivity towards an out-group,” says Misch. “This could be a first, important step in helping people engage in more positive interactions.”

In another part of the study, Misch and Dunham repeated their experiment, but with a difference: They had the kids actually play the co-operative game together (or think they were playing together; in reality, they were playing alone). The researchers found that playing the game with others didn’t further reduce in-group favouritism, suggesting that anticipating co-operation may be as effective as actual co-operation in reducing bias.

This is important, says Misch, because while past research has found that co-operation between groups reduces prejudice and bias, her study is the first to show that simply anticipating cooperation can make a difference.

Some Biases Are Stronger Than Others

It’s striking to see this bias reduction happening in children rather than in adults, she adds. Perhaps if more teachers and parents kept this in mind, she says, they could help prevent prejudice from developing and foster more co-operation between diverse groups of children.

“Human group-mindedness is a characteristic that emerges early in life,” she says. “If we want to change intergroup relations and prejudice, we should start early.”

However, telling children that they should anticipate co-operating with others may not be enough to reduce deep-seated bias in all cases.

In one part of Misch’s study, children were separated into groups based on gender instead of using randomly coloured scarves. Those who were told they’d be playing with kids in the opposite gender group didn’t show the same reductions in bias as children in prior experiments: They still preferred members of their own gender group.

To Misch, this is not too surprising, as gender bias is more firmly established than the kind of bias you see in groups like those created by scarf colour. Stereotyped messages about boys and girls are passed down from parents, reinforced through culture, and perpetuated in media. Plus, gender is an important part of a child’s self-concept, which may cement it more firmly in their minds, she says.

Still, it’s possible that if differently-gendered children were encouraged to co-operate more from an early age, it could make a difference in reducing gender bias over time.

“Anticipating co-operation between some groups may help a little bit, even if it’s not going to be the only thing that’s needed,” she says.

Currently, Misch and her team are expanding their research to see if they can decrease bias based on race and ethnicity through anticipatory co-operation. She’s hopeful that having children—and adults—think about the necessity of working together across difference may lessen prejudice, not only helping us all get along better, but helping us to solve world problems that require a sense of commonality and shared purpose.

“If we can replicate the effect with this study, it would be great,” she says. “Maybe it will just take a change of attitude around cooperation to reduce prejudice and help society.”

*For more information, please visit the below website
www.greatergood.berkely.edu.au