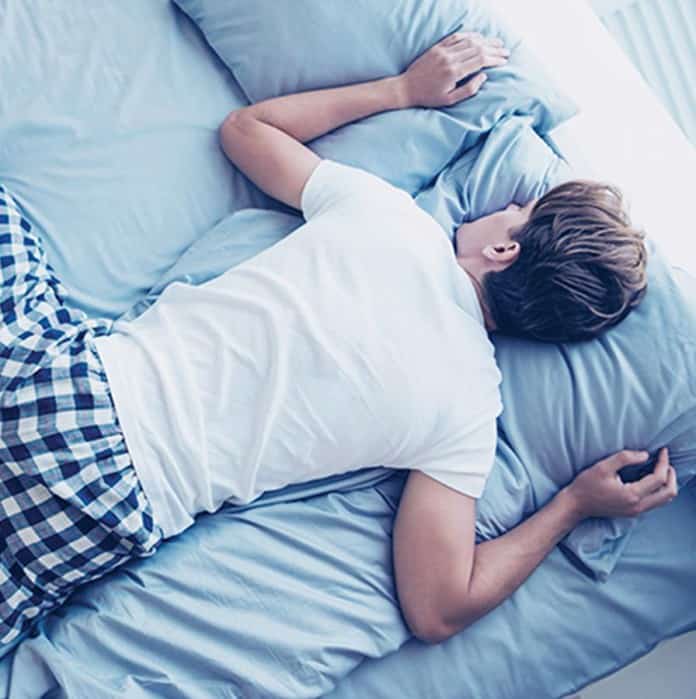 Whether you’re a side sleeper or can only fall asleep on your stomach, we all have our go-tosleeping position – and rarely stray from it. So what do these sleeping positions really mean?

What Each Sleep Position Says About You

Chiropractor B.J. Hardick, D.C. says you can look at sleeping positions from a musculoskeletal perspective and/or from a psychological perspective. Previous research by sleep expert Chris Idzikowski, Ph.D., has looked into the psychological aspect, and says our posture – even while we’re sleeping – can reveal things about our emotional state. Below are the six most common sleeping positions and what they mean for our bodies and, potentially, ourminds.

You can imagine what this position looks like. Gently curled inward with bent arms and legs, like a foetus in the womb. This position is the most common according to Idzikowski’s research (reported by the BBC back in 2003). Notably, twice as many women prefer to sleep like this compared to men.

Hardicksays there’s undoubtedly something universally comforting about holding yourself in a foetal position, though it will curve the spine and result in some hip flexion, like we see when we sit in a chair. Even babies who sleep like this, he notes, feel the inclination to stretch upon waking from this position.

As far as the psychology goes, Idzikowski found these kinds of sleepers to be tough on the outside but sensitive on the inside, and potentially shy upon meeting strangers.

Characterised by sleeping on one’s side with straight legs and both arms down by one’s side, log sleepers are thought to be easygoing and social people, based on Idzikowski’s findings.

Lucky for the log sleepers of the world though, Hardick says this position shouldn’t put too much stress on the body, so long as you have the right pillow. “The goal is to have a pillow that allows the neck to be consistently straight and in line with the spine,” he explains, such as a supportive down or bamboo pillow.

Similar to the log position, the yearnersleeping position is also a side-sleepingstyle, but rather than both arms being down by your side, they’re stretched out in front of you, almost as if you’re reaching for something (hence the name). Idzikowski’s research found these kinds of sleepers to have an open nature, coupled with a tendency for cynicism and suspicion.

And like the log position, Hardick says the yearners shouldn’t have too much trouble as long as their pillow is supportive and the right size to keep the head and neck in line with the spine.

Moving on from side sleeping to the back, the soldier position involves lying on your back with both arms down by your side. As anyone who snores (or has shared a bed with a snorer) knows, sleeping on your back can often result in less airflow, and thus, snoring.

Breathing properly is essential to a good night’s sleep, so if you sleep on your back and notice you’re consistently waking up feeling groggy, it could be worth experimenting with sleeping on your side. Other than that, this is another position where having the right pillow to support your head will make all the difference.

According to Idzikowski’s research, the soldiers of the sleep world are typically quiet, reserved, and hold themselves and others to a high standard.

The free-fall sleeping position is characterised by lying on your stomach with your arms up around your pillow, and your head turned to the side. Unfortunately for these folks, Hardick is not a fan, noting he’s “never seen a great neck in someone who sleeps in this position.”

The reason being, he says, is cranking your head to one side produces “tremendous stress on the ligaments of your neck.” If you can’t fall asleep any other way, it’s not the end of the world, but this is the one sleeping position Hardick says you might want to avoid.

Psychologically, Idzikowski’s study found these types of sleepers to be social and brash, with an inner sensitivity that makes them averse to criticism.

Last but not least (errr, kind of, since this is the least common sleeping position), the starfish is characterised by lying on your back with both arms up around the pillow. As this open posture suggests, Idzikowski’s research found these kinds of sleepers to be good friends and listeners, as well as helpful—but they don’t necessarily like being in the spotlight.

Again, sleeping on your back can lead to snoring and, in turn, reduced-quality sleep. Other than that, Hardick says this position is fine on the body. And yes, the need for a supportive pillow that keeps the head and neck in proper alignment is still a factor here.

How Easy Is It To Change Your Sleep Position?

As anyone who’s ever tried to change their sleeping position likely knows, it’s no easy feat. How can we not help but go back to our default position – especially while unconscious?

Hardicksays his patients often struggle to move from sleeping on their stomachs to their side, for example. But if you are looking to try a new sleeping position, try to be patient as it’ll take some time for it to become comfortable.

He suggests using a neck roll pillow to ensure your head and neck are in alignment, at the very least, and being sure to stretch before bed. Extension stretches like upward-facing dog and hip flexor stretches can also help open up the body before bed, which may help keep your body loose and less likely to revert to that default position. “Whatever position a person falls into might give them some indication of what they could stretch better themselves,” he adds.