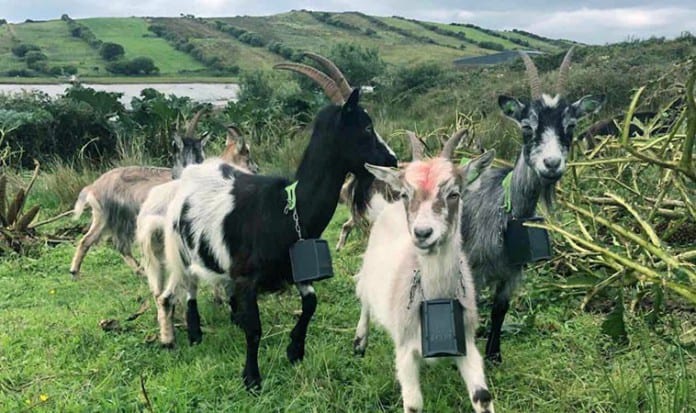 After the peninsula on Howth’s Head in Ireland caught fire last year, city planners knew they needed to take a sterner stance on out-of-control weeds. So they hired a crack team of landscapers led by a dedicated forewoman to manage the weeds that quickly began to grow back over the firebreaks that had been dug.
The Old Irish Goat is, amazingly, not the name of a pub, but a critically endangered species that was Ireland’s naturally-adapted breed, which had not been present in these hills in over a century.

It is their ceaseless munching of local species that make them ideal for the job of de-weeding, and for the next three years in their new home their appetites will become the ultimate fire brigade.

Because the goat had been bred out of existence in captivity, and only roams remote hillsides in small numbers, an organisation called the Old Irish Goat Society has been dedicated to keeping their DNA free from domestic goat genetics and happily supplied a small herd of 25 to take over as Howth’s Head new ‘firefighters’.

The Old Irish Goat has short legs, large horns,a thick coat, and are perfectly adapted to life on the Irish hills.

“Our goats come from the mountains and eat whatever’s there, scrub, heather, gorse. They’re the most suitable for this task,” the Old Irish Goat Society’s chair, Pádraic Brown says.

“We’re giving our beautiful little creatures a job to do, which they’re doing. They’re not just a tourist attraction, they can earn their keep.”

Currently the firefighters consist of 14 nannies and 11 kids, which will be added to with adult males until it grows to about 100 goats—a necessary reinforcement as the strength of Irish wildfires on Howth and elsewhere have been growing over recent years.

As strange as it may seem in a country as seemingly wet and cloudy as Ireland to have multiple firefighter units for a single city, the unique solution gives the chance for a largely forgotten piece of wild natural heritage to raise awareness of the fascinating breed on its own behalf.
www.goodnewsnetwork.org