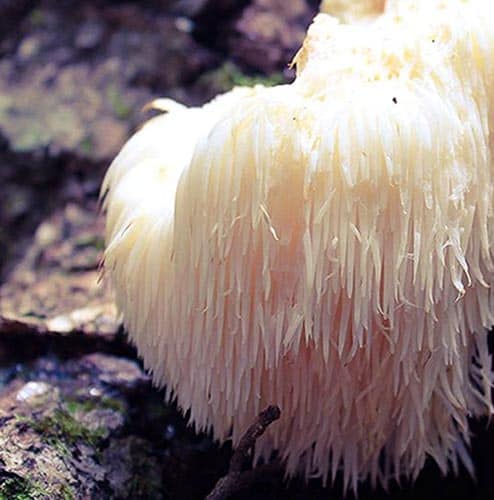 Easily grown at home, and a relatively inexpensive therapeutic food, lion’s mane is a beautiful mushroom with cascading spines instead of gills that shows potential in slowing the progression of neurological disorders — including Alzheimer’s and Parkinson’s disease. Research has also found the mushroom to be beneficial in treating symptomatic depression and anxiety associated with menopause.

The secret to the success of lion’s mane is due to abundant erinacines. These compounds enhance the production of nerve growth factor — a protein that encourages the regeneration of neurons. Additionally, the mushroom also protects against brain cell death, which is an important factor in both Alzheimer’s and Parkinson’s disease.

Another protective aspect involves the mushroom’s ability to deter the development of beta-amyloid plaque in the brain. Paul Stamets reports in “Lion’s Mane: A Mushroom That Improves Your Memory and Mood?”…

“The reduction of beta amyloid plaques in the brains of mushroom-fed mice vs. the mice not fed any mushrooms was remarkable. The formation of amyloid plaques is what many researchers believe is a primary morphological biomarker associated with Alzheimer’s. Plaques linked to beta amyloid peptide inflame brain tissue, interfere with healthy neuron transmission, and are indicated in nerve degeneration.”

Moreover, the mushroom helps ease issues related to menopause — such as depression, irritability, anxiety and insomnia. Researchers at Kyoto Bunkyo University observed 30 menopausal women who were given either lion’s mane or a placebo over the course of four weeks. The mushroom group reported a significant reduction in menopausal symptoms.

If you would like to try your hand at growing lion’s mane at home, do-it-yourself mushroom kits are a great place to start. Otherwise, the mushroom is becoming increasingly available at gourmet food stores or it can be taken as a supplement. Almost 20 percent protein — and tasting similar to lobster or shrimp — lion’s mane is an excellent vegetarian alternative to seafood. Lastly, Stamets suggests:

“Lion’s mane is best when caramelised in olive oil, deglazed with sake wine, and then finished with butter to taste. Lion’s mane can be bitter if not cooked until crispy along the edges. It takes some practise to elicit their full flavour potential.”