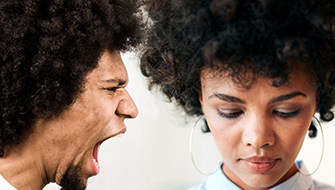 One of the hardest parts about dealing with an abusive, manipulative, or otherwise toxic person is simply getting them to leave you alone. These folks love to prod, and in those moments, it’s important to know what to do. Enter: the grey rock method.

WHAT IS THE GREY ROCK METHOD?

If the words ‘grey rock’ sound boring to you, that’s exactly the point. The grey rock method is basically about being the human equivalent of a grey rock, explains W. Keith Campbell, Ph.D., psychologist and author of The Handbook of Narcissism and Narcissistic Personality Disorder.

“It’s simply being unresponsive,” says somatic psychologist and licensed marriage and family therapist Holly Richmond, Ph.D., LMFT. “It’s called grey rock because you have that image in your mind of this grey, unmovable rock.”

Campbell adds that the idea is that you engage with this person “in as limited a capacity as you can, in particular, being non-emotional and nondramatic.”

When you ‘become’ the grey rock, Richmond says, you don’t engage with this person or their behaviour. Either you avoid interactions entirely or keep them super brief and unemotional. Richmond’s go-to phrase for example, is, “I don’t find that very interesting.” You could also say things like, “I’m busy,” “Mhm,” or even shrug with no verbal response.

“Using the grey rock method means that the narcissist can’t use their standard manipulation tactics. There’s not the emotional reaction they’re used to,” Campbell notes. “If the narcissist experiences failure, hopefully they move on to something else that will meet their ego’s needs.”

WHO SHOULD IT BE USED WITH

While this method may very well work on most people you try it on, it’s specifically meant for toxic people of all kinds, whether that’s an abusive romantic relationship, a manipulative co-worker, or a narcissistic neighbour.

Campbell specifically recommends this method for people in an entangled relationship with an emotionally controlling and manipulative narcissist. Richmond adds it can be used with anyone who doesn’t respect your boundaries or is abusive in any way.

“If someone is trying to be dominant or controlling, the grey rock method is a very effective practice in shutting people down, holding your own boundaries, and maintaining your own control,” she says.

WHEN TO USE IT

You’ll know it’s time to bust out the grey rock method when a toxic person in your life is bothering you and engaging in manipulative behaviour of some kind. Of course, in a perfect world, we would cut off contact with these kinds of people, but sometimes that’s not an option.

According to Richmond, it works in cases of extreme jealousy or possessiveness, someone trying to control who you’re with and where you’re going, and with people who are gaslighting you, to name a few examples.

It also works when people try to incite drama, get any sort of rise out of you, and so on.

As Richmond explains, most emotionally abusive people are looking for attention—and negative attention is better than no attention. So don’t give it to them!

Along with keeping your responses short and unemotional, you can use non-verbal cues like avoiding eye contact and closed-off body language to signal you’re not interested in interacting.

Simply put, the major pro of this method is that in many cases, it works. Narcissists and abusive people thrive on creating turmoil in the lives of others, so if their victims don’t reflect that, it’s not as fun to them.

“If you’re not engaging the person, they’ll go away because they realiSe their attempts to get you on the hook are fruitless,” Richmond explains.

And on top of that, it’s a pretty straightforward and simple method that doesn’t involve much on your part. After all, the idea is to be as boring as a grey rock.

According to Campbell, it’s important to note there isn’t scientific evidence to back up this method, despite its anecdotal success. “I have spoken to people who have used this successfully, but this is a practice that came out of the community of people who have experienced narcissistic abuse,” he explains.

In addition to that, if you’re the kind of person who is easily emotionally affected by people, this method might not be so easy. Campbell notes it can take a lot of discipline to master it.

And lastly, in some cases, this method can have the opposite effect it’s intended to. “It can lead to some very negative reactions on the part of the narcissist,” Campbell says. And as Richmond adds, “You really have to pay attention to safety. For some people, this will make them escalate, so if the abusive person doesn’t immediately lose interest, they could use more harmful tactics to engage with you.”

WHAT TO DO WHEN IT’S NOT WORKING

In the instance that the grey rock method is not working, you may have to take a different course of action. Of course, that action will depend on the level of negativity you’re dealing with.

“You need to reach out and get support, and let someone else know what’s happening. On the low end of the spectrum that could be a friend or neighbour, and on the high of the spectrum, the police,” Richmond says.

In some cases, Campbell adds, it’s helpful to handle the conflict directly, potentially with the help of a therapist or mediator if healthy communication just doesn’t seem to be happening. And if all else fails he says, “I’ve heard it’s helpful to get a coach, essentially somebody who’s experienced with narcissistic abuse and can be there as a support figure during the conflict.”

The main thing here is to know your own boundaries and not put up with someone violating them. And if you think any escalation of the situation could go too far or become dangerous, remove yourself from the situation and get help immediately.

From manipulation to narcissism to general toxicity, the reality is everyone will encounter these things once in a while, and sometimes often, if there are negative people in your life. But the good news is, getting a grasp on the grey rock method and learning how to implement it can help you keep toxic people at bay and maintain your boundaries.