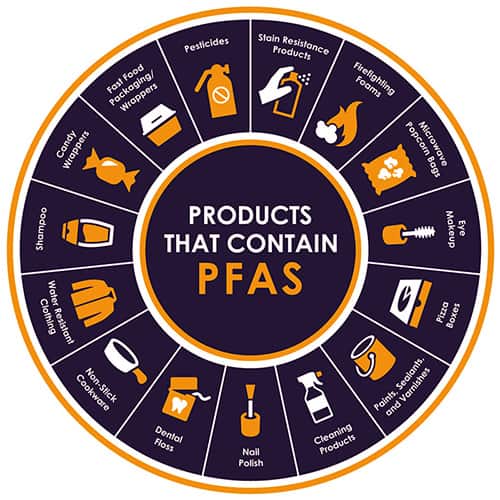 A new study finds that exposure to per- and polyfluoroalkyl substances (PFAS) – a large and diverse group of industrial chemicals found in many everyday products – is associated with an increased risk of developing diabetes in midlife women.

A new study published in Diabetologia (the Journal of the European Association for the Study of Diabetes [EASD]) has found that exposure to per and polyfluoroalkyl substances (PFAS) – a large and diverse group of industrial chemicals found in many everyday products – is associated with an increased risk of developing diabetes in midlife women.

PFAS are a group of more than 4,700 synthetic chemicals, first developed in the 1940s, which are widely used in industry as well as in consumer products such as non-stick cookware, water and stain-repellent coatings, food packaging, carpeting, firefighting foam, and cosmetics.

Their molecular structure is based on a linked chain of carbon atoms with one or more fluorine atoms attached, and the extreme stability of those carbon-fluorine bonds make PFAS highly resistant to being broken down.

This durability causes PFAS to persist and accumulate in the environment as well as in the bodies of humans and animals where they can remain for years, leading to them being referred to as ‘forever chemicals.’

Their ubiquity and persistence in both the environment and the human body has led to PFAS exposure becoming a serious public health concern, resulting in restrictions and even bans on their use. At least one type of PFAS was present in the blood samples of nearly every American tested by the US Biomonitoring Program, and they were also detected in the drinking water supply of more than 200 million people in the USA.

A recent review of possible health effects of these chemicals suggests that exposure to some may be associated with pre-eclampsia, altered levels of liver enzymes, increased blood fats, decreased antibody response to vaccines, and low birth weight, although causal relationships have yet to be established.

Many PFAS have molecular structures which resemble those of naturally occurring fatty acids, resulting in them having similar chemical properties and effects on the human body.

Fatty acids act on a class of protein molecules found in cells called peroxisome proliferator-activated receptors (PPARs), which act as fat and insulin sensors and are the main regulators of the formation and development of new adipocytes (fat cells) as well as the control of the body’s fat and glucose levels. Structurally and chemically similar, PFAS compounds could potentially interact with the same PPARs, disrupting their regulatory behaviour and suggesting a possible mechanism for these substances to affect diabetes risk.

Experimental studies with cell cultures suggest that exposure to the high levels of PFAS found in some humans may interfere with PPAR function, leading to the increased production of fat cells, changes to fat and sugar metabolism, and abnormal inflammatory responses.

The sample group for the study was selected from the Study of Women’s Health Across the Nation (SWAN), an ongoing multi-site, multi-ethnic, community-based prospective cohort study of midlife women to characterise the menopausal transition and its association with subsequent health endpoints. A total of 3302 premenopausal participants aged 42-52 years who met the selection criteria for SWAN were recruited at seven locations in the USA during 1996-1997, and given a baseline clinical examination which was repeated annually.

The SWAN-Multi-Pollutant Study (SWAN-MPS) was initiated in 2016 to evaluate the roles of environmental pollutants in chronic diseases during and after the menopausal transition. It analysed the stored blood and urine samples from 1400 of the study participants, which had been collected by SWAN from the third follow-up (1999-2000) onwards. These were tested for the presence of environmental chemicals including seven PFAS.

After excluding women who had diabetes at SWAN-MPS baseline, as well as participants for whom insufficient data was available, the authors were left with a final sample of 1237 women with a median age of 49.4 years who had been monitored from 1999-2000 through to 2017. During the 17,005 person-years of follow-up there were 102 cases of incident diabetes: a rate of 6 cases per 1000 person-years. Compared to participants who remained free of the disease, those who developed diabetes were more likely to be black, from Southeast Michigan (a more socioeconomically disadvantaged area), less educated, less physically active, have a larger energy intake and higher BMI at baseline.

The authors observed that: “Higher serum concentrations of certain PFAS were associated with higher risk of incident diabetes in midlife women.” They also note: “The joint effects of PFAS mixtures were greater than those for individual PFAS, suggesting a potential additive or synergistic effect of multiple PFAS on diabetes risk.”

Serum concentrations of PFAS were categorised into high/middle/low exposure groups (tertiles), and a hazard ratio (HR) for incident diabetes was calculated by comparing the incidence rate in the ‘high’ or ‘middle’ tertiles to that in the lowest tertile (reference group). The team found that combined exposure to the seven different PFAS had a stronger association with diabetes risk than was seen with individual compounds. Women in the ‘high’ tertile for all seven were 2.62 times more likely to develop diabetes than those in the ‘low’ category, while increased risk associated with each individual PFAS ranged from 36% to 85%, suggesting a potential additive or synergistic effect of multiple PFAS on diabetes risk.

The strength of the association between combined exposure and incident diabetes rates also suggests that PFAS may have substantial clinical impacts on diabetes risk. The authors point out the 2.62 times increased risk was roughly equivalent to the magnitude of having overweight or obesity (BMI between 25 kg/m2 and 30 kg/m2) compared with having normal weight [(BMI less than 25 kg/m2 (HR 2.89)], and even greater than that for current smokers vs never smokers (HR 2.30) observed in their study population. They say: “Given the widespread exposure to PFAS in the general population, the expected benefit of reducing exposure to these ubiquitous chemicals might be considerable.”

This prospective cohort study supports the hypothesis that exposure to PFAS, individually and as mixtures, may increase the risk of incident diabetes in midlife women. Although the effect sizes in men and other populations not included in their study are unknown, if these results are also applicable to men as well as to individuals of all ages and ethnicities regardless of location, then approximately 370,000 cases (around 25%) out of the 1.5 million Americans newly diagnosed with diabetes each year could be attributable to PFAS exposure. These findings suggest that PFAS may be an important risk factor for diabetes and have a substantial public health impact.

The authors conclude: “Reduced exposure to these ‘forever and everywhere chemicals’ even before entering midlife may be a key preventative approach to lowering the risk of diabetes. Policy changes around drinking water and consumer products could prevent population-wide exposure.” They advise that regulations which focus on a few specific compounds may be ineffective and persistent PFAS may need to be regulated as a ‘class’. Finally, they note that clinicians need to be aware of PFAS as unrecognised risk factors for diabetes and to be prepared to counsel patients about sources of exposure and potential health effects.

The study was conducted by Dr Sung Kyun Park and colleagues at the Department of Epidemiology, School of Public Health, University of Michigan, Ann Arbor, Michigan, USA.

*For more information and references, please visit the below website.
www.sciencedaily.com