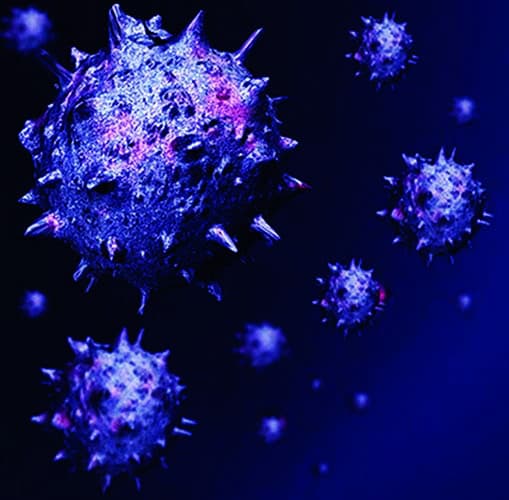 Researchers have discovered that Type I interferon (IFN) plays a key role in helping the immune system effectively target viruses, while stopping white blood cells from ‘going rogue’ and attacking the body’s own organs. This opens the way to potential new treatments that can save many lives.

McMaster University researchers have found not only how some viral infections cause severe tissue damage, but also how to reduce that damage.

They have discovered how Type I interferon (IFN) stops the immune system ‘going rogue’ and attacking the body’s own tissues when fighting viral infections, including COVID-19.

“What we have found is that it is also critical to stop white blood cells from releasing protease enzymes, which can damage organ tissue. It has this unique dual function to kick start an immune response against a viral infection on the one hand, as well as restrain that same response to prevent significant bystander tissue damage on the other,” he said.

The research team investigated IFN’s ability to regulate a potentially dangerous immune response by testing it on both flu and the HSV-2 virus, a highly prevalent sexually transmitted pathogen, using mice. Data from COVID-19 patients in Germany, including post-mortem lung samples, was also used in the study.

“For many viral infections, it is not actually the virus that causes most of the tissue damage, it is our heightened immune activation towards the virus,” said Ashkar, a professor of medicine at McMaster.

First co-author of the study and PhD student Emily Feng said: “Our body’s immune response is trying to fight off the virus infection, but there’s a risk of damaging innocent healthy tissue in the process. IFNs regulates the immune response to only target tissues that are infected.

“By discovering the mechanisms the immune system uses that can inadvertently cause tissue damage, we can intervene during infection to prevent this damage and not necessarily have to wait until vaccines are developed to develop life-saving treatments,” she added.

“This applies not just to COVID-19, but also other highly infectious viruses such as flu and Ebola, which can cause tremendous and often life-threatening damage to the body’s organs,” said first study co-author Amanda Lee, a family medicine resident.

Ashkar said the release of harmful proteases is the result of a cytokine storm which is life-threatening inflammation sometimes triggered by viral infections. This has been a common cause of death in patients with COVID-19, but treatment has been developed to prevent and suppress the cytokine storm.

Ashkar said that steroids like dexamethasone are already used to rein in an extreme immune response to viral infections. The authors used doxycycline in their study, an antibiotic used for bacterial infections and as an anti-inflammatory agent, it inhibits the function of proteases causing the bystander tissue damage.

Lee added: “This has the potential in the future to be used to alleviate virus-induced life-threatening inflammation and warrants further research.”

The study was funded by the Canadian Institutes of Health Research and the paper was published in the journal PLOS Pathogens.