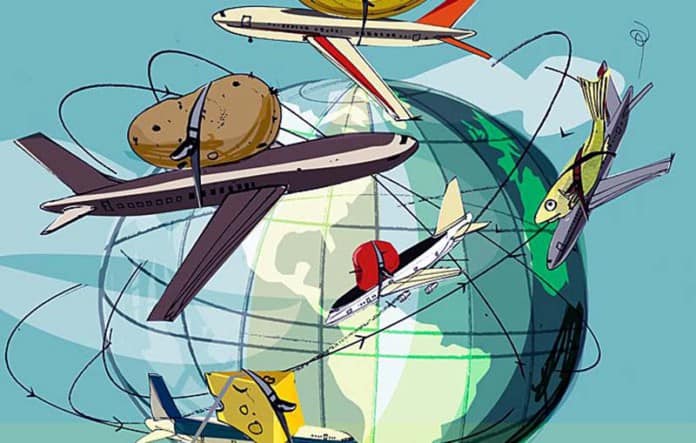 In many places around the world, grocery store produce aisles are a delightful array of colours, even in the depths of Winter, when it feels like not much could grow outside. But this year-round variety has a real cost on the planet, with a new study finding that ‘food miles’ account for 19 percent of all food emissions – three times more than previously thought.

“Our study estimates global food systems, due to transport, production, and land use change, contribute about 30 percent of total human-produced greenhouse gas emissions. So food transport – at around six percent – is a sizable proportion of overall emissions,” says the study’s lead author, University of Sydney environmental modelling researcher Mengyu Li.

“Food transport emissions add up to nearly half of direct emissions from road vehicles.”

You can imagine that modelling the entire food chain around the world is a difficult process, and most papers in the past have either looked at specific countries, or specific products (for example tomato ketchup or beef), but this isn’t able to scale out to give a very good overall picture of what’s happening.

“Although carbon emissions associated with food production are well documented,” the team write in their new paper, “the carbon footprint of the global trade of food, accounting for the entire food supply chain, has not been comprehensively quantified.”

Instead, the researchers used a framework called FoodLab to take in 74 countries and 37 economic sectors – like livestock, coal, and fruit and veg – and four transportation modes to create a model that incorporates the entire global supply-chain network.

The results are not exactly comforting. Food transport alone contributes 3 gigatonnes of emissions annually – equivalent to 19 percent of all food-related emissions, including land use.

The researchers also looked at what would happen if everyone just ate locally. The team worked out that it would reduce food miles emissions by 0.27 gigatonnes (0.24 gigatonnes for high-income countries alone!), and food production emissions by 0.11 gigatonnes.

Unfortunately, eating entirely locally is unrealistic, as some places aren’t able to grow their own food, but it gives a good suggestion of where we can go from here.

“We tend to interpret information around us in simplistic terms, like ‘meat is bad and vegetables are good’ but we wanted a much more comprehensive picture,” University of Sydney nutritional ecologist David Raubenheime says.

“Our study shows that in addition to shifting towards a plant-based diet, eating locally is ideal, especially in affluent countries,” he added.

The researchers suggest that in this case, consumers have the most chance of causing widespread change.

So, for those of us in high income countries, individually choosing the local or seasonal option is one of the best ways forward.

This is particularly important with fruit and vegetables, as they need to be refrigerated to be sent around the world, creating even more emissions.

Sometimes grocery stores will include a country-of-origin label to assist in more local selections. It’s even better if you know that the crop was grown in your state or area of the country.

The other issue is that many of us are now used to being able to buy avocadoes, asparagus, berries, and citrus at any time of year.

“One example is the habit of consumers in affluent countries demanding unseasonal foods year-round, which need to be transported from elsewhere,” says Raubenheime.

“Eating local seasonal alternatives, as we have throughout most of the history of our species, will help provide a healthy planet for future generations.”

The research has been published in Nature Food.